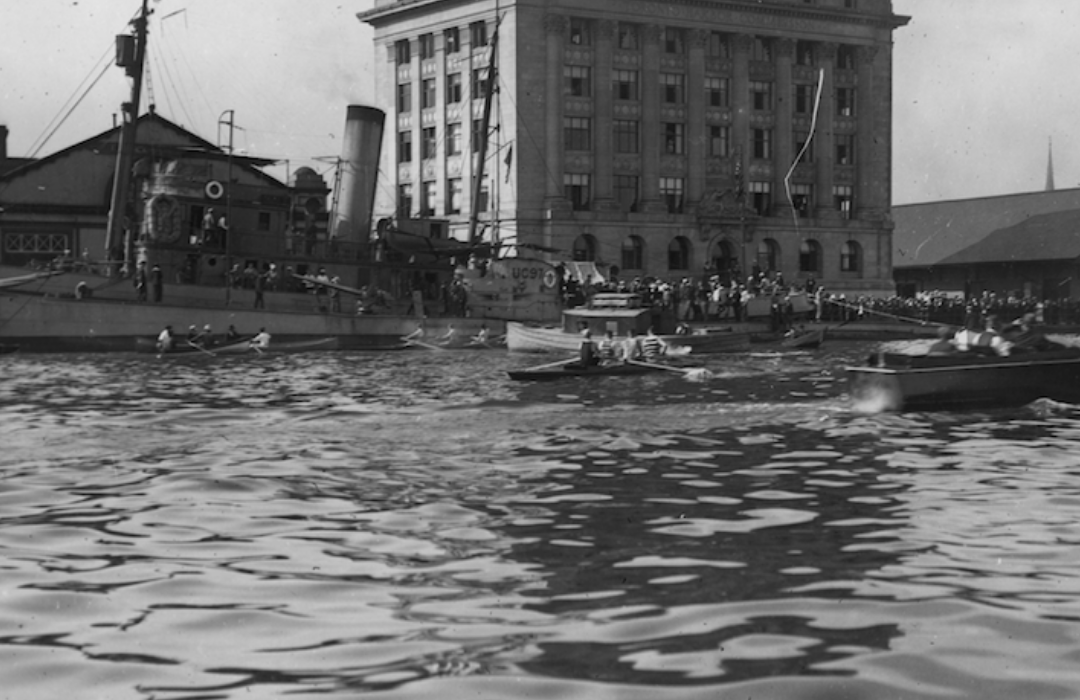 The Port of Toronto is an inland port in Toronto, located on the northwest shore of Lake Ontario on the city’s waterfront. For 225 years, the Port has served as a unique and crucial piece of infrastructure for the city of Toronto. PortsToronto, a long-standing partner of the Redpath Waterfront Festival, maintains this 50 acres (20 hectares) consisting of Marine Terminal 51, Warehouse 52, and the International Marine Passenger Terminal. 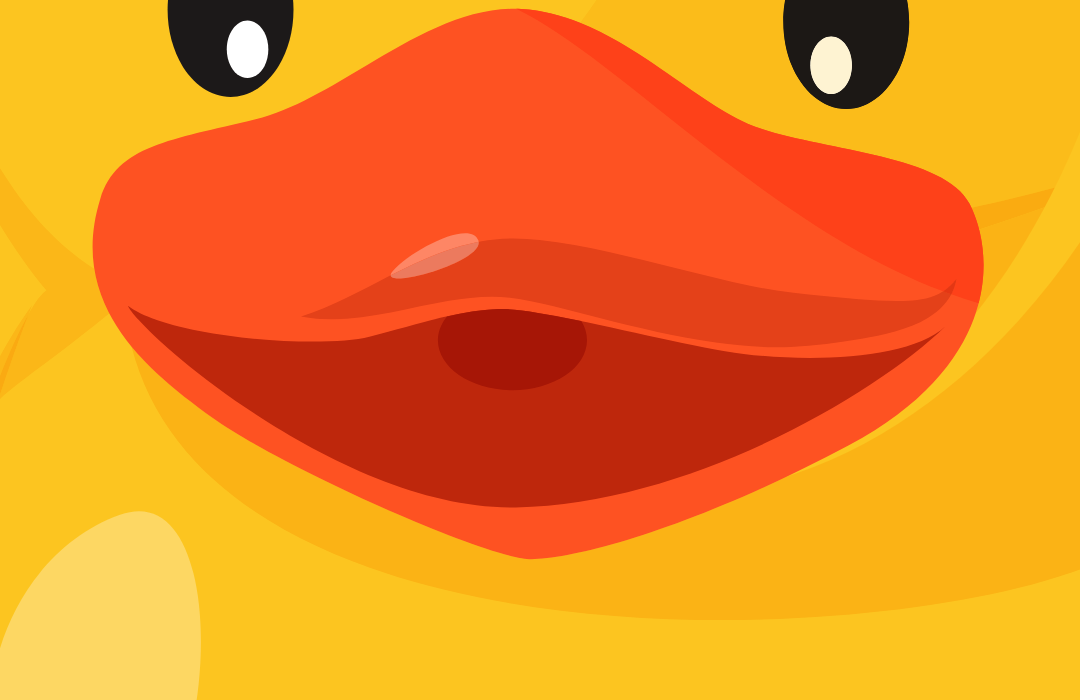 The World’s Largest Rubber Duck is digitally floating back to Toronto to join the Redpath Waterfront Trail from September 17 to October 3. The Duck will be the fifth Augmented Reality (AR) stop on the trail and will pay ohmage to the real-life, 6 storey tall, 30,000lb Rubber Duck that became the festival’s most popular program in its ten-year existence. 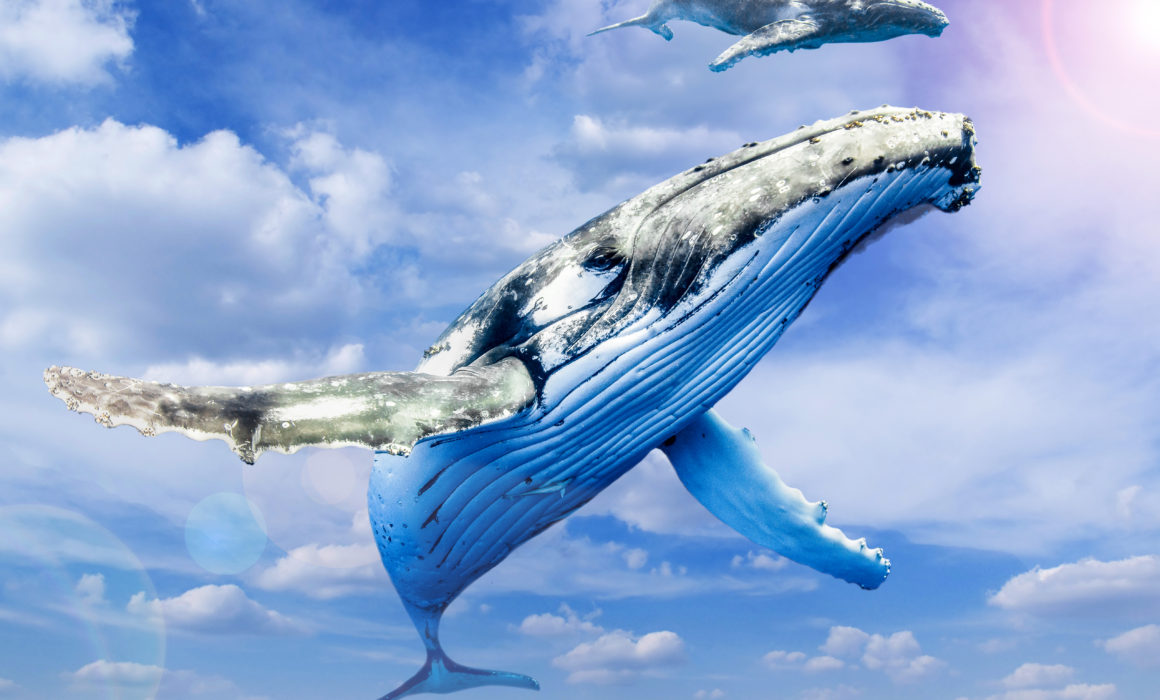 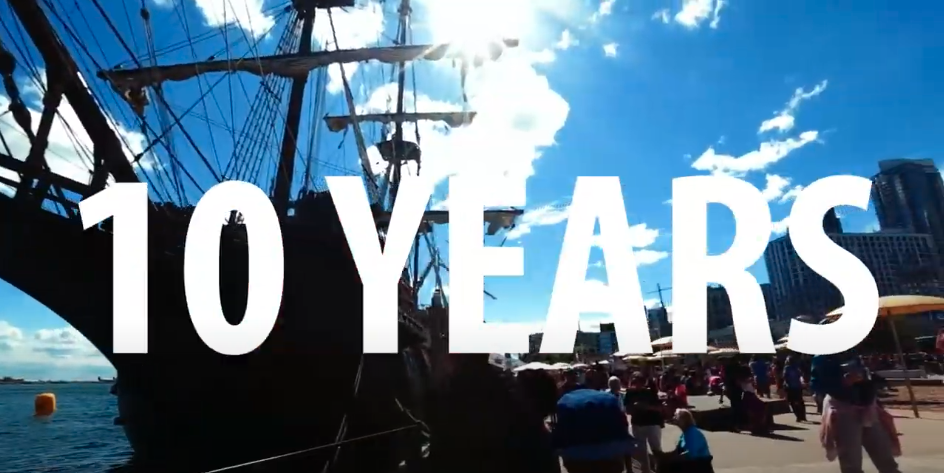 The Redpath Waterfront Festival (RWF), presented by Billy Bishop Airport, is celebrating its 10th anniversary by releasing a video 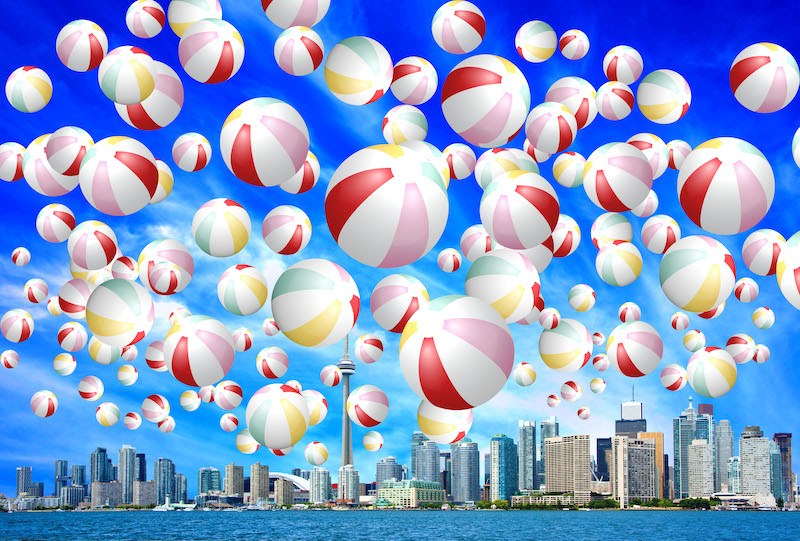 With a giant beach ball art installation, a whimsical H20-themed circus show, a Family Fun Zone and loads of delicious food and drink, the Redpath Waterfront Festival, happening June 22-24, is the best place to kick off the summer of 2018.

“Redpath Waterfront Festival is a must-attend event on the waterfront and Billy Bishop Airport is a proud and long-standing sponsor of this celebration of everything we love about summer,” said Deborah Wilson, Vice President, Communications and Public Affairs. “Whether you’re going to see the beach ball installation at HTO Park, visiting the water-themed circus, enjoying the HMCS Oriole along the dock wall, or taking in the food and drink offered throughout the waterfront, the festival has something for everyone.”

One of the main attractions of this year’s festival is a large kinetic installation called the HTO Pendulum Wave, presented by Menkes. Based on the physical laws of science’s popular instrument the pendulum wave, Canadian designers at Decor & More were inspired by the waterfront, the beach, and fun in the sun for this custom installation. The HTO Pendulum Wave will be made of six 6.5 ft diameter beach balls suspended from a truss frame that is 22 ft high, 42 ft long and weighs 19,000 lbs in total. The balls will swing from the truss multiple times a day for visitors to see the natural wave in motion. HTO Pendulum Wave will be located in HTO Park. 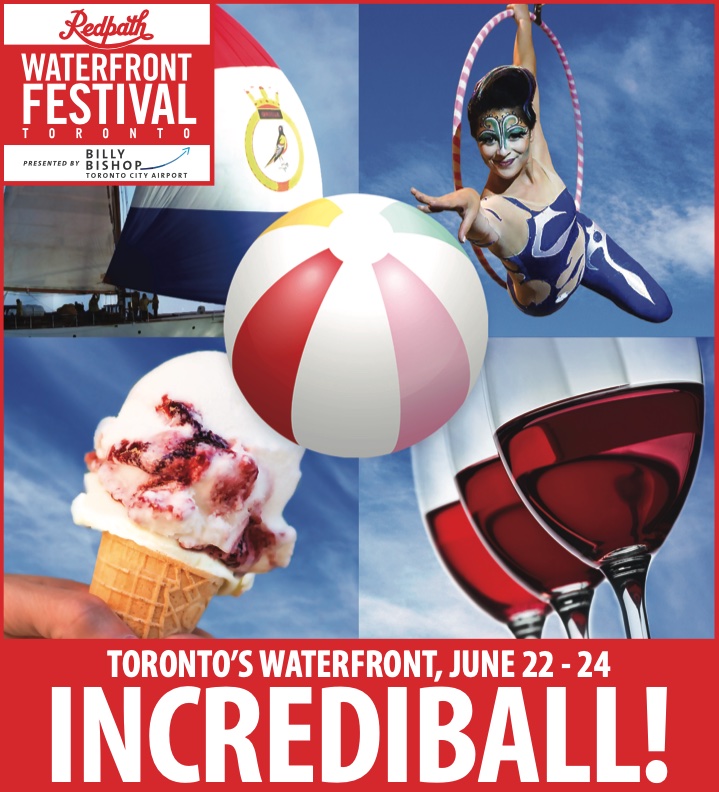 Another custom program at the festival, which is also inspired by water, is Aqua Cirque, an H20-themed circus show taking place in Sherbourne Common. Join a small but heroic seahorse on a whirlwind underwater adventure. On the journey, meet a gang of mystical creatures from dancing jellyfish to mermaid aerialists. The enchanting fun continues after each Aqua Cirque show where performers will teach audiences basic tricks, such as juggling, hula hooping, basic acro and more. Show times and the workshop schedule can be found here.

Officers from the Canadian Armed Forces will be joining this year’s festival, including the Royal Canadian Navy, the Royal Regiment of Canada and the Queen’s York Rangers. Visitors will be able to try on gear and learn about daily operations in the Forces. As part of this program, the legendary HMCS Oriole will be sailing into Toronto for the first time in 25 years. The Oriole is a sail-training vessel that was based out of CFB Esquimalt in Victoria, B.C. for the past 60 years and just recently moved to the east coast joining the Atlantic Fleet in Halifax, N.S. She is a sailing ketch that was launched nearly 100 years ago making her the oldest commissioned vessel in the Navy. 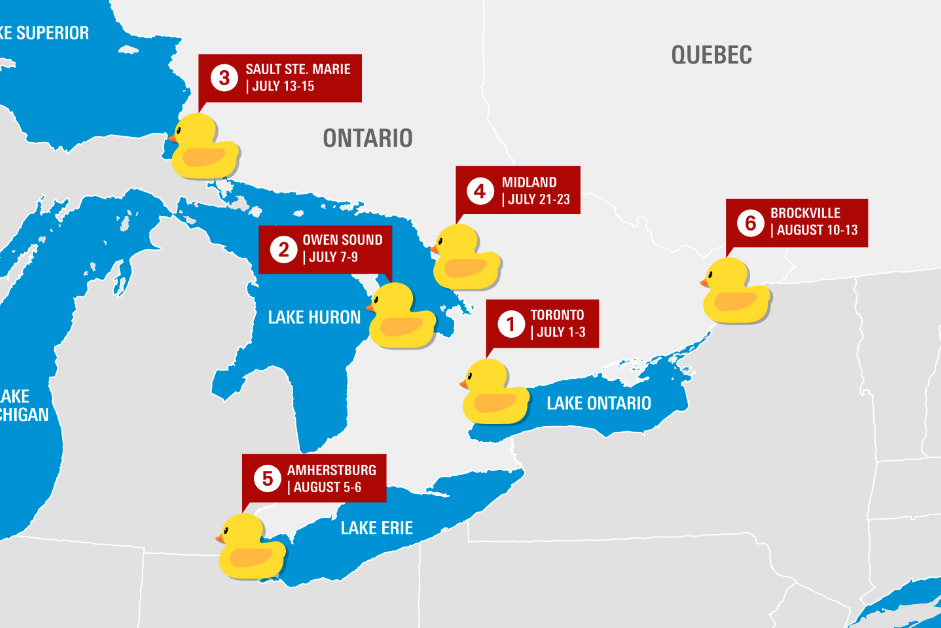 Announced today, The World’s Largest Rubber Duck is joining the ONTARIO 150 Tour to celebrate Canada’s 150 during the summer of 2017. Standing 61 feet tall, 79 feet wide, 89 feet long and weighing in at 30,000 pounds, this will be the first time the Duck has ever been to Canada.

Bringing the World’s Largest Rubber Duck to Canada has been made possible through the Ontario Ministry of Tourism, Culture and Sport’s Celebrate Ontario program, which was announced earlier this week on March 6, 2017. 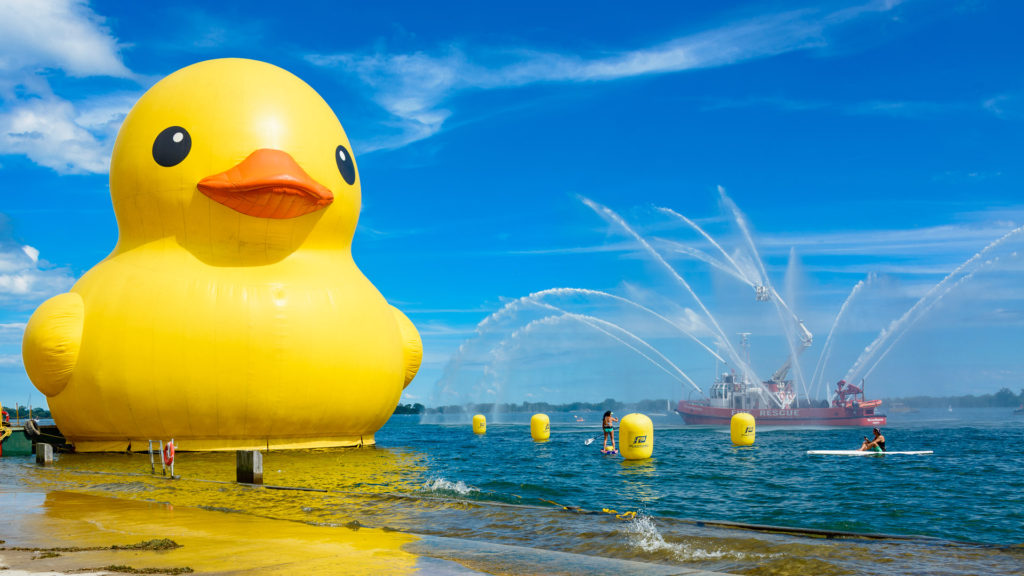 Other ONTARIO 150 Tour programs include the West Coast Lumberjack Show, Rhythm of the Nation and local live music and entertainment in each port.

The ONTARIO 150 Tour, presented by Redpath Sugar is travelling to six ports throughout Ontario during the summer of 2017 to celebrate Canada’s 150th Anniversary. Launching on Canada Day weekend in Toronto at the Redpath Waterfront Festival, presented by Billy Bishop Airport, the tour will travel on to Owen Sound, Sault Ste. Marie, Midland, Amherstburg and finishes in Brockville on August 13.

Water’s Edge Festivals & Events is an Ontario not-for-profit corporation created in 2011 with a mandate to be the driving force behind the successful Redpath Waterfront Festival in Toronto and promoting waterfront destinations throughout Ontario with nautical festivals and events. 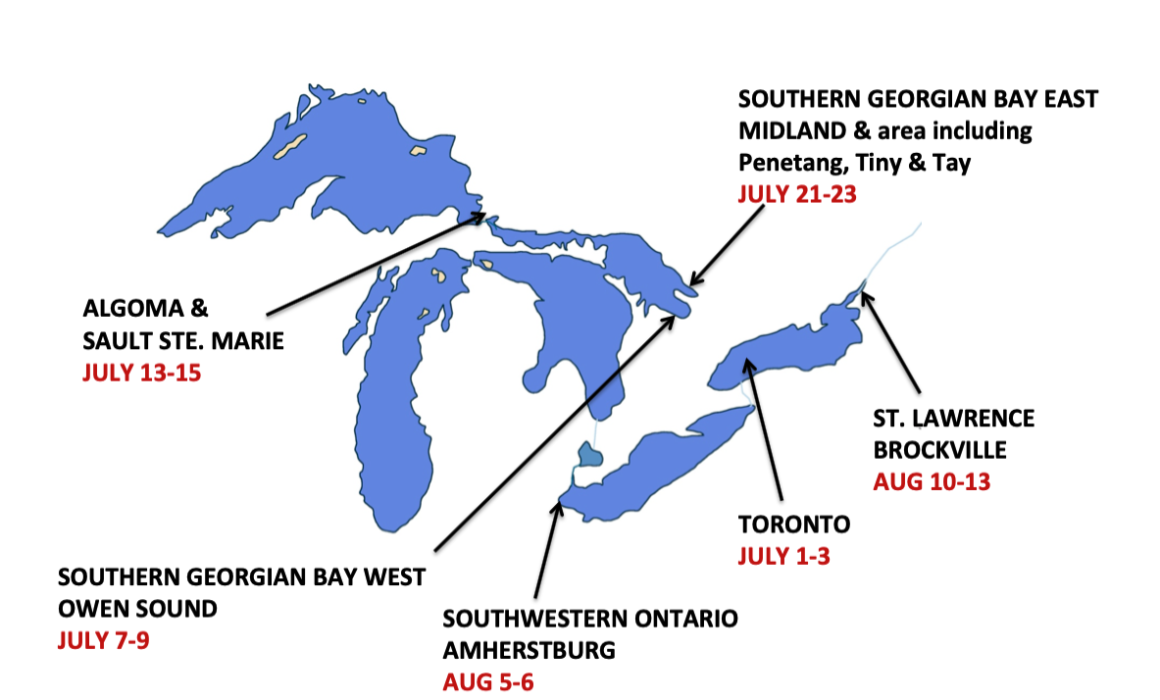 Water’s Edge Festivals & Events is proud to announce the ONTARIO 150 Tour presented by Redpath Sugar: a pan-provincial event that will travel throughout Ontario during the summer of 2017 celebrating Canada’s 150th anniversary. From July 1st to August 13th, the ONTARIO 150 Tour will travel to six Ontario ports, making its debut on Canada Day weekend in Toronto at the Redpath Waterfront Festival, presented by Billy Bishop Airport and continuing on to Owen Sound, Sault Ste. Marie, Midland, Amherstburg, and finishing in Brockville.

An exciting summer of waterfront entertainment will celebrate Canada’s 150th anniversary by integrating elements of our nation’s multiculturalism into every aspect of programming for a truly Canadian pan-provincial tour. ONTARIO 150 Tour programs include: a Canada 150 Fund initiative written specifically for this tour called Rhythm of the Nation, an interactive dance and musical performance centered around nationally-renowned street artist DJ Creeasian; The West Coast Lumberjack Show, an action-packed, must-see Canadian show that will have everyone breaking out their plaid; and in addition to the traveling programs, each port will have its own live entertainment and local activities.

The ONTARIO 150 Tour is proud to be supported by the Ontario Ministry of Tourism, Culture and Sport’s Celebrate Ontario Blockbuster program, Ontario Cultural Attractions Fund and the Government of Canada’s Canada 150 Fund.

“I am proud our government is supporting unique festivals and events, like the ONTARIO 150 Tour, that support local economic growth, create jobs and draw tourists to communities across the province,” said Eleanor McMahon, Minister of Tourism, Culture and Sport. “This investment will help Water’s Edge Festivals & Events offer expanded experiences and encourage Ontarians to get out and discover all our province has to offer. This is especially important in 2017 as we celebrate Ontario’s 150th anniversary.”

The launch of the tour will be on Canada Day weekend, July 1-3, 2017, at Toronto’s annual
Redpath Waterfront Festival (RWF), presented by Billy Bishop Airport. This year’s festival invites visitors to #CanuckItUp for a truly Canadian three-day celebratory event. In addition to the Tour programming, the Royal Canadian Navy will sail in with their 440-ft frigate, HMCS Ville de Québec, which will be open for public deck tours all weekend. The Festival will also welcome back the Waterfront Artisan Market with over 60 delicious food and unique craft vendors as well as interactive entertainment along Toronto’s waterfront.

Redpath Sugar – Presenting Sponsor
“For over 50 years, Redpath Sugar has been crafting sugar in Canada on Toronto’s waterfront and is committed to supporting and engaging with its community,” says Nancy Gavin, Redpath Sugar Director of Sales, who is also the ONTARIO 150 Tour Board Chair. “In addition to being the title sponsor for the annual Redpath Waterfront Festival in Toronto, we are proud to be the presenting sponsor of this pan-provincial event that celebrates Canada’s special anniversary.”

Sign up for our e-newsletter to receive festival announcements