She’s kind of a big deal

In those days, there was a great rivalry between New England built schooners and the fishing vessels built in Nova Scotia. The Grand Banks off of Newfoundland was overflowing with cod and was one of the richest places to fish in the world. At the beginning of each season, ships from Gloucester, Massachusetts and Lunenburg, Nova Scotia would unofficially race to see who could reach the Grand Banks first. It was thought that Nova Scotia built vessels were heavier and wider than the ones from New England and were therefore slower.

This belief was put to the test in the first International Fisherman’s Race in the Autumn of 1920. Eight Nova Scotian vessels took part, one of which was captained by Angus Walters, a gifted sailor and fisherman. Walters suffered a crushing defeat with his ship falling behind early on in the race. The final race was between a ship from Nova Scotia and one from Gloucester. The New England vessel won the first race by 20 minutes and the second by 7 minutes. There was no need for a third race.

Walters returned home to Lunenburg disgruntled but his disappointment quickly turned into a fierce determination. He teamed up with four Nova Scotia businessmen and a local architect named, William Roué, to design and build a winning racing and fishing vessel. 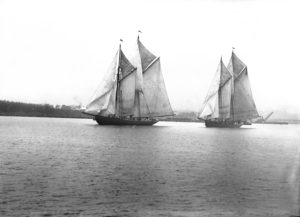 Ship from Nova Scotia leading her rival from Massachusetts at start of second race during first North Atlantic International Fishing race off of Halifax.  W.R. MacAskill Nova Scotia Archives accession no. 1987-453 no. 115.

Close to 100 years ago on March 26th, 1921, the Bluenose was launched in Lunenburg, N.S. and hundreds of people crowded the harbour to watch. Someone asked one of the shipwrights “What’s this one going to be like?” The shipwright replied “She’ll be alright, but she’s a bit different to most vessels.” 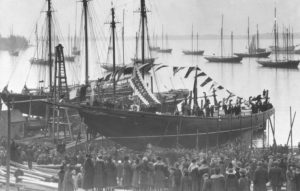 The Bluenose was launched nearly a century ago in Lunenburg, N.S. W.R. MacAskill Nova Scotia Archives 20040012.

If they only knew just how “different” she would be.

The Bluenose won her first Fisherman’s Trophy in October 1921. Over the next 17 years, she was only beaten once. In 1930, she lost to the Boston schooner, Gertrude L. Thebaud, but she defeated her a year later for the Fisherman’s Trophy and then again in 1938. Her victories on the water earned her the title “The Queen of the North Atlantic”. So how did she do it? What was it about the Bluenose that allowed her to be undefeated for so long? 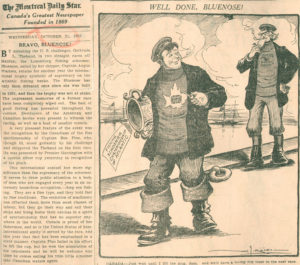 The Montreal Daily Star congratulates the Bluenose on holding on to the Fisherman’s Trophy for a another year in 1931. Scrapbook Collection Nova Scotia Archives MG 9, No. 108.

The current Captain of Bluenose II, Phil Watson, says William Roué “designed her to the maximum of the rules.” For her style, he says she’s was a long ship and “length in the water is what determines the speed of the vessel.” So, it was her length that made her reach incredible speeds.

Watson says it was also something else. “Once you give someone this powerful machine, you need the Captain and the crew to be able to get every last knot of speed out of her and that’s what Captain Walters’ magic was.”

“He knew his boat inside and out,” Watson says. 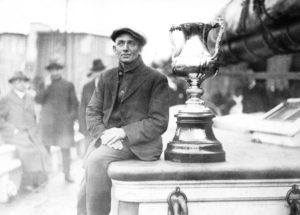 Captain Angus Walters with the International Fishermen’s Trophy on the deck of the Bluenose in 1921. W.R. MacAskill Nova Scotia Archives accession no. 1987-453 no. 261

The Bluenose was also a standout at the Grand Banks. During the 20’s and 30’s, she held the record of carrying the most fish back to Lunenburg and over time she became a symbol of Nova Scotia’s prosperous fishing and shipping industry. The schooner travelled all over the world, representing Canada and Nova Scotia. In May 1933, leading up to the Bluenose’s visit to the Century of Progress exhibition in Chicago, it was written in the Maritime Merchant that “There is perhaps no schooner in the world that has had so much publicity and none…that is better known.”

In 1937, a new series of coins were issued by the Canadian government to commemorate the coronation of King George VI. Our country’s dime was adorned with an image of the Bluenose. 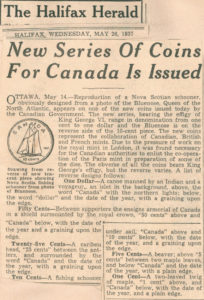 Canada issued a new series of coins in 1937. One of them was the dime adorned with the image of the Bluenose. Scrapbook Collection Nova Scotia Archives MG 9, No. 108

It’s over 80 years later and she’s still on the dime. People from all over the world still travel to Lunenburg to visit her replica, the Bluenose II.

Watson says it because she’s still very much alive. “When you come to see the Bluenose II, you’re seeing very much what was 100 years ago,” says Watson. “You’re able to touch it. You’re able to talk to people that still use it, who go to sea on it and have a somewhat similar experience to what they did years ago.”

The Bluenose is more than a renowned sailing and fishing vessel. The Ottawa Journal said it best in June 1937. At the time, the salt fishery was declining, the Bluenose was old and battered and the Halifax Herald and Captain Walter were fighting for her to be preserved. In an op-ed the Journal wrote:

“It stands as a symbol of the finest qualities of our sailors and our fishermen, of their intelligence, initiative and courage in the face of many perils. In her high rigging stirs a great sage of the sea, of 300 years of brave men in the brine of bitter seas, of sad-eyed women on wind-swept piers, of an endless battle against an elemental foe.”

In World War II, the North Atlantic sea lanes were closed and the Grand Banks fishery collapsed. The Bluenose was sold to the West Indian Trading Company. She spent her final years carrying bananas and rum throughout the Caribbean. In January 1946, she struck a reef off of Haiti and sank.

Many people living out East, especially in the small towns, can draw their history back to the days of the schooners Watson says.“There is a direct line for those people,” he says. “These schooners were a way of life, whether it was transport or fishing, they were just ubiquitous on the coast,” Watson explains. “They tell their kids, ‘That’s what used to be here at this dock.'”

The Bluenose is Nova Scotia’s sailing ambassador, an important part of our country’s history, a Canadian icon and a symbol of the men and women who both lost and gained so much from the fishing and shipping industry. She’s sailing into Toronto for our festival on Canada Day weekend. The last time she visited was 10 years ago. Come on down and see her. Explore her deck. Soak in her history. It most likely will be many years before she returns.