Attention crew! The tall ships are BACK!

Leading the fleet will be the Canadian icon, Bluenose II. You might recognize her from the change in your pocket. The renowned schooner has adorned our dime since 1937. The last time she paid a visit to The Six was 10 years. So, it’s a whale of a deal that she’s coming, but more on that in our next post. All of the vessels will be open for you to explore and snap photos with. Tickets for deck tours will be available on our website in the new year.

The ships are sailing in as part of the TALL SHIPS CHALLENGE® Great Lakes Series. If you haven’t heard of it, it’s a race series organized by Tall Ships America that journeys through the Great Lakes, stopping in US and Canadian cities. An average of 15 tall ships race from port to port and are timed. The Redpath Waterfront Festival is the first stop in the 2019 tour. In Canada, the ships will go on to visit Midland, Sarnia, Kingsville and Brockville. This portion of the tour is called TALL SHIPS CHALLENGE® ONTARIO. To find out more about the tour, head to tallshipson.com. 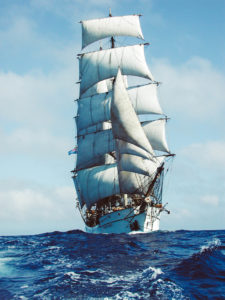 Picton Castle is currently on her 7th trip around the world.

Now back to the main attractions, the majestic vessels that will cruise in to Toronto on Canada Day weekend. By Bluenose II’s side will be Picton Castle, a deep-sea square-rigged sailing ship. She was named after an 11th century castle in Wales and served as a minesweeper in World War II. These days, she spends her time travelling. Picton Castle is scheduled to return in May from her seventh trip around the world. Yes, seventh.

Two American ships will also be getting in on the action. U.S. Brig Niagara is a reproduction of a flag ship that helped the British win a key battle in the War of 1812. The magnificent vessel is one of the most historically authentic tall ships in the United States. Niagara will be joined by Pride of Baltimore II, another reconstruction of a great American warship, an 1812 Baltimore Clipper. Like Picton Castle, she too is a world traveller. Since being commissioned in 1988, Pride of Baltimore II has visited more than 40 countries. Other tall ships cruising in for the dock party include Denis Sullivan, Fair Jeanne, St. Lawrence II and Toronto’s own tall ship, Playfair.

The Royal Canadian Navy and the Canadian Coast Guard are also onboard for this year’s festival. The Navy will once again bring their oldest ship, HMCS Oriole, to Toronto’s waterfront. The Oriole came to town for last year’s festival and was adored and toured by all. The Coast Guard will be sailing in on one of their bright red and white service vessels. No word yet on which ship they will be docking. This is the first year, the Coast Guard will be participating. We’re looking forward to welcoming them ashore.

The tall ships won’t be the only source of entertainment at the 2019 festival. There will be plenty of good times to be had on land with delicious maritime eats, cultural programming and nautical games for kids of all ages. We’re still putting the finishing touches on this year’s programming. We will share more details with you leading up to the festival here and on social media. If you don’t already, give us a follow on Instagram or Facebook @towaterfrontfest. That’s it from us for now. Check back in a few weeks to learn more about the ship that was a reigning racing champion for 17 years, our star vessel, Bluenose II.